One of the most impressive collection of online African American genealogical materials can be found at the Afro-Louisiana History and Genealogy website at http://www.ibiblio.org/laslave. The database, created by Dr. Gwendolyn Hall, a professor emerita of history at Rutgers University, consists of a vast collection of materials discovered in 1984 in a courthouse in Pointe Coupee Parish, Louisiana. Included are documents delineating the backgrounds of approximately 100,000 slaves brought to Louisiana in the 18th and 19th centuries. The database is searchable by name, gender, racial designation, and plantation or origin, and will be invaluable to many African-ancestored researchers.

In several previous posts, I discussed how I am focused on the research goal of identifying the mother of my great-grandmother, Elizabeth "Bettie" Foshee, who married Robert B. King and lived in Laurens County, South Carolina. The difficulty revolves the fact that she is essentially impossible to find prior to the 1880 census.  In that census, there is also a 12-year-old William Fooshee in the household. Her brother?

But let's go at this from a different perspective. In the 1920 census for Moon Township in Newberry County, South Carolina, my maternal grandparents George Washington Martin and Elizabeth "Lizzie" Estelle King are living with their 6 oldest children (my mother wasn't born until December of that year), plus 75-year-old widow Gemima E. Forshee, listed as an "aunt". Yet so far as I know, my grandfather's father was an only child, and none of his mother's sisters or half-sisters married a Fo(r)shee. Given that I know that grandmother's mother was a Foshee, the only reasonable conclusion is that it is my grandmother's aunt by marriage, the widow of a brother to Elizabeth Foshee. So who was Gemima E. Fo(r)shee married to? 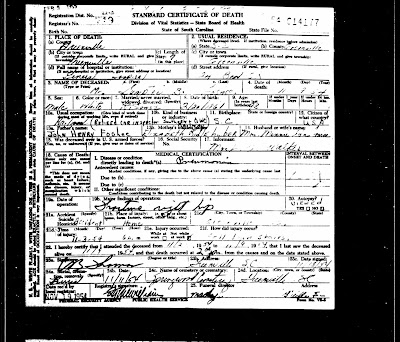 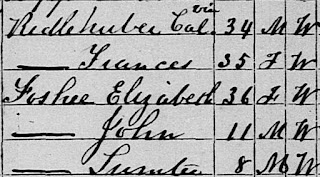 The 1870 Moon Township census strongly points to it. In that census 36-year-old Elizabeth Foshee is living with her two sons John and Sumter in the home of 34-year-old Calvin Ridlehuber and 35-year-old Frances (presumably Calvin's wife). It would be reasonable to conclude that Calvin is Elizabeth's brother. Where is John Henry Foshee, Elizabeth's husband?


But what if Gemima E. is not Elizabeth?  Could I be going down the wrong path entirely? If 75-year-old Gemima was still alive at the time of the 1920 census, then wouldn't I be able to find her South Carolina death certificate? Looking for Foshee and similarly spelled names didn't find anyone. But then I did a search for all surnames beginning with "For". I had sometimes heard the name pronounced and even spelled "Forshee". And for the very first time, I found this death certificate: 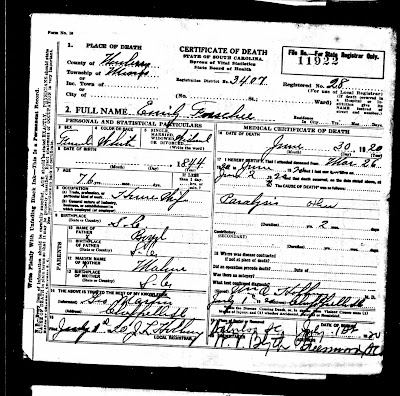 Here was Emily "Forschee", dying on June 30, 1920, in Moon Township in Newberry County, at the age of 76. And the informant is George Martin, who is almost certainly my grandfather. According to the death certificate, Emily's father was a Boyd and her mother was...a Martin? The name is unclear, and might be something else. But even if she isn't Elizabeth Ridlehuber, could she still be a woman who married one of Elizabeth Foshee King's brothers?  In the next posting, we'll look for the early life of Emily Boyd Foshee.
Posted by Drew Smith at 10:42 AM 2 comments:

Labeling Photographs in an Archival-Safe Manner

People in earlier times didn't know how to protect documents and photographs in an archival way. They didn't necessarily have access to acid-free pens, pencils, mounts, sheet protectors, and other items. Unfortunately, photographs were glued into albums or mounted in "magnetic" albums that used materials that caused fading and disintegration of the very paper. Papers filed in cardboard boxes and in wooden drawers also suffered from acidic conditions that permanently damaged and discolored them. And materials filed with newsprint were practically doomed to destruction.

We, on the other hand, can easily obtain archival-safe items from office supply stores and vendors on the Internet. It is our responsibility as "family archivists" to properly store and label items, and to help preserve even those things that have been damaged in the past.

The use of acid-free polypropylene sheet protectors, available from any office supply store, should be used to encase every item. This isolates each document or photograph and prevents it from "contaminating" adjacent items. Newspaper clippings, city directories, and other things printed on newsprint should be scanned on acid-free paper and stored to preserve them. The original newsprint item should then be discarded or isolated from all other materials. 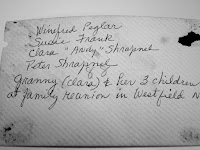 Finally, we should never label photographs or other documents with ordinary lead pencils or ink pens.  Ordinary pencil can fade over time. Ink may bleed through the paper, and the chemical composition of the ink may be injurious to other materials. Ink, too, may fade and become illegible over time.

There are special archival-safe pencils available specifically for labeling photographs and other documents.  Check with office supply and photo supply companies for these pencils and for other archival supplies such as acid-free binders, folders, boxes, photo mounts, and other related supplies.

The Genealogy Guys are committed to sharing important news both on our podcasts and on our blog. We therefore announce that today, 12 September 2018, has been a very big day for news about DNA in the genealogical community.

I'm happy to announce another industry first from MyHeritage! We now support the upload of 23andMe v5 and Living DNA data files, in addition to supporting data uploads from all major DNA testing services, including Ancestry, 23andMe (prior to V5) and Family Tree DNA (Family Finder).

Since 2016, MyHeritage has allowed users who have already tested their DNA to upload their DNA data from Ancestry, 23andMe and Family Tree DNA. They receive DNA Matches and ethnicity estimates on MyHeritage for free. However, previously MyHeritage did not support the upload of tests based on the chip called GSA (Global Screening Array), now being used by 23andMe (v5), and by Living DNA. Recent improvements to our DNA algorithms now allow us to support DNA data processed on GSA chips, and so we now support uploads of 23andMe v5 and Living DNA data files.
Uploading DNA data to MyHeritage is fast and simple. For users that upload now, we offer full access to DNA Matching, Ethnicity Estimates, our industry-leading chromosome browser, and more, for FREE.

Upcoming changes
As of December 1, 2018, our policy regarding DNA uploads will change: DNA Matching will remain free for uploaded DNA data, but unlocking additional DNA features (for example, ethnicity estimate, chromosome browser, and some others) will require an extra payment for DNA files uploaded after this date. We will announce the full details of the new policy once it is finalized, closer to December 1st. All DNA data that was uploaded to MyHeritage in the past, and all DNA data that is uploaded now and prior to December 1, 2018, will continue to enjoy full access to all DNA features for free. These uploads will be grandfathered in and will remain free.

Today, we announce that Ancestry will deliver ethnicity estimates with increased precision to its customers, through a new algorithm that analyzes longer segments of genetic information, marking an important evolution in the way we interpret DNA data. Having built and expanded our DNA reference panel, we have a better understanding of genetic signatures globally, can break down geographic ethnicity estimates with greater specificity and give you a more detailed picture of your origins.

The rollout of our enhanced ethnicity estimates will take place on September 12, 2018 and with this update, new and existing customers can expect more precise results across Asia and Europe. For example, Scandinavia will be more clearly defined as Norway and Sweden and Asia East will be broken down into six regions (Japan, Korea and Northern China, China, Southeast Asia—Dai (Tai), Southeast Asia—Vietnam, Philippines). All updates to existing customers will be free of charge.

But we never stand still. Genomics is an emerging field and as a leader in this field, we remain committed to investing in ‘what’s next’. This next generation ethnicity estimate is one more way Ancestry is helping people discover, with greater detail, the stories of those who came before them.

Do You Have Greek Ancestors?

Researching your Greek ancestors can be a fascinating experience. You will want to learn more about Greek history, both recent and ancient, to learn more about your ancestors' background and the rich heritage cultural heritage. The culture and traditions that your took with them when they emigrated from Greece were strong, and often endure for generations after your ancestors arrived.

Posted by George G. Morgan at 1:39 PM No comments: