MyHeritage has just released a free tool called The Census Helper™, a great facility that scans your tree and automatically compiles a list of individuals appearing in it who are very likely to be found in the 1950 U.S. census, along with relevant details. Armed with this list, you’ll know exactly which family members to search for in the newly released records, and your research will be much more focused. You’ll also be able to research those individuals in the census records with the click of a button.

It also provides the facility to produce a list of people in your tree who are likely to be included in every other census, from 1790 through 1940.

I encourage that if you don't have a tree on MyHeritage to upload it as a GEDCOM and use this tool for free, so they can get a head start on your 1950 census research. You can do so via this landing page.

You can learn more about the Census Helper™ in the MyHeritage blog post, and feel free to spread the word.

Posted by George G. Morgan at 2:19 PM No comments:

Drew Smith participated in the "What's Next: Living Longer Better Smarter" podcast (episode 26) titled "Taking the Mystery Out of Family History". Fred Fishkin and Mary Furlong discuss genealogy and the Genealogy Guys Podcast with Drew, and are then joined by Rick Voight, CEO of Vivid-Pix (https://www.vivid-pix.com/) to discuss Memory Station Station (https://www.vivid-pix.com/memorystation).

Watch this great discussion at https://youtu.be/Fn6MAiDaWng.

Listeners of the Genealogy Guys Podcast are familiar with the Zion Cemetery Project on which Drew and George are involved. The video below was recently made at a meeting about the African American Burial Grounds and Remembering Project at the Tampa Bay History Center in Tampa, Florida. The video includes status reports about work on several cemeteries in the Tampa Bay area, and it includes very powerful spoken word presentations commemorating the people who are interred there.

Posted by George G. Morgan at 1:18 PM No comments:

MyHeritage has introduced Family Tree Timeline, a new, free feature that allows you to explore

how your family history unfolded over time.

The Timeline is a visual representation of one individual from your family tree and his or her direct ancestors. The lifespans of these individuals are mapped on the same axis to allow you to see them in relation to each other, which can provide refreshing insights into your family history. The Timeline shows the ages of your ancestors at various points in their lives: how old they were when they had children, how long they lived, and how their lifespans overlapped with those of other family members or major world events.

The Family Tree Timeline is a great way to get a feel for the historical context of your ancestors’ lives and a better understanding of the different generations that make up your family tree. It’s bright and colorful and can be downloaded and shared with family and friends.

Genealogy Expert
Posted by George G. Morgan at 11:34 AM No comments:

I just created my first LiveStory at MyHeritage. It is easy to use and produces an interesting biographical video. Here it is!

Email ThisBlogThis!Share to TwitterShare to FacebookShare to Pinterest
Labels: LiveStory, My Heritage

Posted by George G. Morgan at 3:48 PM No comments:

No Need to Risk Sending Out Your Precious Photos to a ServiceUse at Home, Library, Community Centers, & Adult Living Locations

Digitize & Save Your Photos at Home, Adult Center, or Library

With Memory Station, there is no need to risk sending your precious photos by mail to a service to save and protect your cherished memories. Memory Station provides fast, one-click ease of use and is available directly through Vivid-Pix at https://vivid-pix.com/memorystation.

Don’t Store Your Memories in a Shoebox

“For over a century, we’ve taken pictures. Unfortunately, these memories are often stored in shoeboxes and albums – never to see the light of day or shared. This is not why we took photos. But it’s a chore to scan and do more with these treasured keepsakes. Right? Not anymore!” said Rick Voight, CEO, Vivid-Pix.

The Vivid-Pix Memory Station is a simple one-click solution. “Simply press the blue scanner button and digitize up to 10 images at one time. After saving, just open Vivid-Pix’s patented RESTORE software and click a button to automatically fix color, black and white, and sepia photos and documents to vibrantly bring them back to life,”said Michael Sidejas, Director of Product Management, ScanSnap, Fujitsu Computer Products of America.

Vivid-Pix piloted the Memory Station at two of the most prestigious locations in the United States: The Genealogy Center at Allen County Public Library in Fort Wayne, Indiana (the largest genealogy center in a public library in America) and the Thrive Center in Louisville, Kentucky (a nationally recognized technology testing location for health organizations).

Curt Witcher, Director of Special Collections and Genealogy Center Manager, said, “When Rick described the Memory Station and how it can help our patrons as well as the community, we immediately understood and wanted to participate. We’ve gotten to know Vivid-Pix well over the past few years. Their willingness to listen to patrons, family historians, and library ideas, and then adapt their product to these desires has been refreshing and collaborative.”

Sheri Rose, CEO/Executive Director, Thrive Center, stated, “Thrive Center is a nationally recognized technology testing location to assist individuals, caregivers, and living facilities. The Vivid-Pix Memory Station is a wonderful way for older adults to reminisce and relive a lifetime of memories and joy. This is the second solution that Vivid-Pix has installed in our facility. Its ease of use makes it a great way for individuals and organizations to reminisce and reconnect with loved ones.”

Vivid-Pix helps people relive photos and documents by connecting individuals, families, and friends with their most treasured memories, restored through Vivid-Pix AI technology. The U.S. Patent Office has awarded two patents to Vivid-Pix for its image processing techniques used to automatically correct faded images. Vivid-Pix founders brought Kodak’s “You Press the Button, We Do the Rest” philosophy to the design of Vivid-Pix RESTORE. Vivid-Pix RESTORE is available at: https://vivid-pix.com/restore/buy.html, with a free trial at: https://vivid-pix.com/restore/free-trial.html. For more information about Vivid-Pix, visit: www.vivid-pix.com.

MyHeritage Announces Podcast: Blast from My Past We are thrilled to announce that we are launching our first-ever podcast, Blast From My Past. The podcast will feature the incredible true stories of people whose lives were changed by what they discovered through MyHeritage about their family’s pasts — whether it was a close relative they never knew existed, the key to unlocking an old family mystery, or a newfound connection to a long-forgotten legacy.

Since our foundation, MyHeritage has been privileged to play a key role in many breathtaking and deeply moving stories. We see it as a duty and an honor to share these inspiring stories with you, and we have been doing so through various platforms, including this blog, our social channels, the international media, and video. Now, we are so excited to utilize a new medium for sharing these stories: the podcast. It’s our first foray into the world of podcasting, and in complete alignment with our company philosophy — it’s all about our users.

The debut episode, “The Secret of Ereikoussa,” tells the story of Yvette Corporan, a bestselling author and Emmy Award-winning producer who set out on a quest to confirm the extraordinary story her grandmother told her: that the Greek Island community where she grew up conspired to hide a Jewish family right under the noses of their Nazi occupiers. 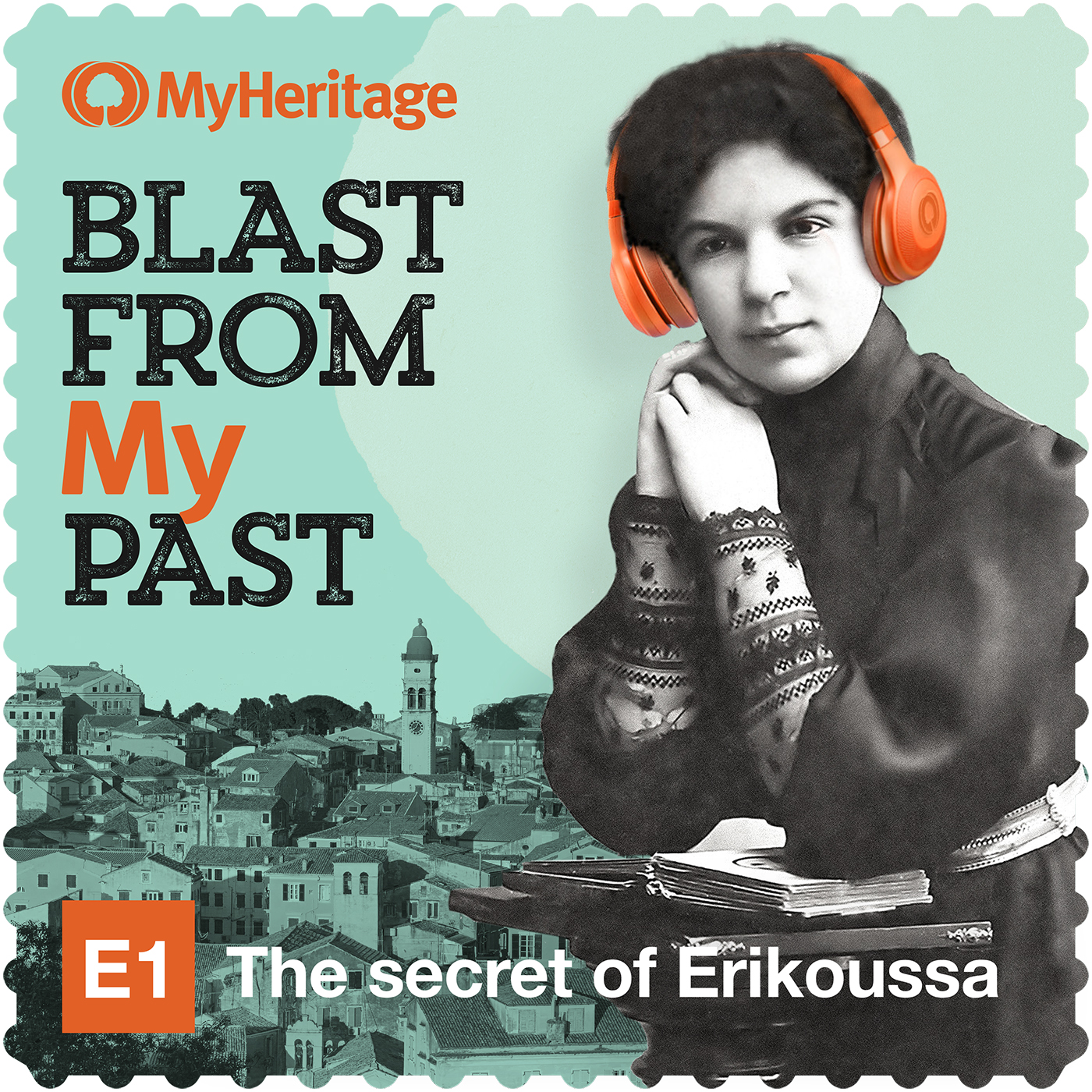 Listeners will follow along as Yvette digs for clues, and, with the assistance of MyHeritage CEO Gilad Japhet, makes discoveries beyond what she had ever imagined.

Some of the stories we have lined up for this season include:

With audio production by award-winning agency Listen, Blast From My Past is presented in first-person narrative format with no host, giving center stage to the protagonists. Each episode will focus on a story, or a series of stories surrounding a common theme, and will run for a maximum of 30 minutes. The first season will include eight episodes, to be released once every two weeks — and we intend for it to be the first of many.

Blast From My Past is now available for streaming and download on all major podcast platforms — and of course, it’s entirely free.

We’ll be choosing 3 of our podcast followers to win a MyHeritage Complete Plan, our ultimate family history package which includes unlimited family tree size, access to over 16 billion historical records, priority customer support, and much, much more.

To enter, just comment below that you’re following the podcast on one of our podcast streaming platforms. We’ll notify the winners on Sunday, March 13, 2022. Good luck!

Our best stories come straight from our users, so please don’t hesitate to share your thoughts and ideas with us at blastfrommypast@myheritage.com.

Posted by George G. Morgan at 1:50 PM No comments: