Anyone who reads this blog already knows that I'm a huge fan of Vivid-Pix RESTORE software. I'm using it every day these days, not just for my own digital photos and documents but also for images I find on the Internet that I feel could be made clearer and more helpful. This applies to photographs, of course, but to digitized documents such as census records, parish records, civil registrations and vital records, wills and probate records, land records, and newspaper images.

My attention is often piqued by just seeing an historical image that I want to see more clearly. That happened again this morning when The Florida Historical Society posted the image shown below on its Facebook page. This photo dates from 1898 and shows some of the forces who processed through Florida on their way to Cuba in the Spanish American War. You remember ... that's the one during which Teddy Roosevelt and his Rough Riders captured San Juan Hill. 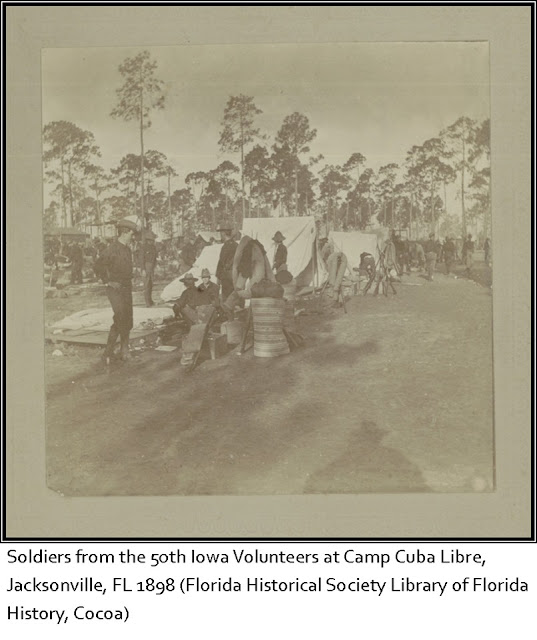 I saved this photo to my computer and opened it in RESTORE. With one click I selected the image you see below. (I could have made adjustments to lightness and contrast and fine-tuned the image a bit more.) However, before I saved the image, I also added metadata to it. The metadata window I completed looks like this: 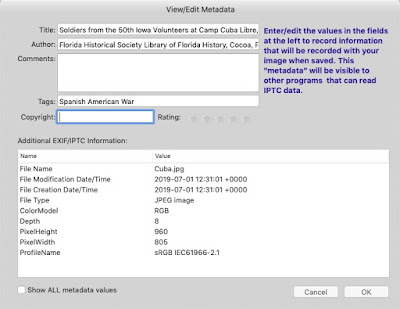 Essentially what I added in the way of metadata was what the Florida Historical Library of Florida had placed on the typed label it scanned with the photograph. Once I added metadata, I clicked the OK button. I then saved the image to my computer. The new image is shown below. 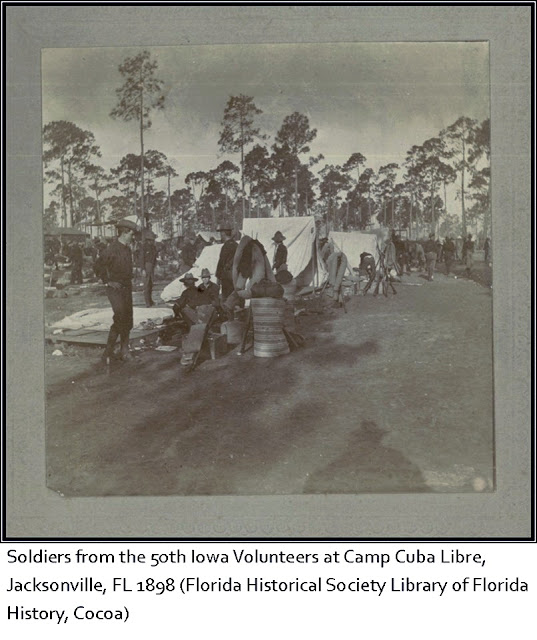 You can now see a lot more detail that you might not have noticed before, including the shadow cast by the photographer in the lower right corner. I could have cropped the image to eliminate the label because I now have all of that in the metadata I saved with the image. When I locate the image (on my Mac in this case), I highlight the image in the directory, right-click my mouse, and select Get Info. The image below displays all the metadata I had added. I can use that to search for files on my computer, including the keyword tag I added for Spanish American War.

Now I not only have a cleaner image, I have incorporated data that I can use to more effectively manage my images.

Take advantage of a free trial of RESTORE at Vivid-Pix for PC or Mac by entering the code 3GenealogyGuys3R. I think you will be as impressed as I am with the results. And don't forget to use it on documents and newspapers, digital microfilmed images, and more.

In the meantime, improve your knowledge of history and learn more about the Spanish American War at Wikipedia at https://en.wikipedia.org/wiki/Spanish%E2%80%93American_War.