Back from the Caribbean 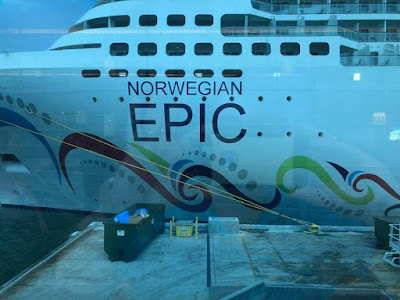 The Genealogy Guys joined our good friends C. Ann Staley and Blaine Bettinger (and both of his boys) for The Villages Genealogical Society Cruise. Wonderful friends from The Villages and other friends joined in for a great time. We even had a Norwegian couple who came along.

We sailed on the Norwegian Cruise Line Epic and it truly is one of the biggest (and longest ships) I've ever sailed. WOW! I had to take breaks walking to absorb the atmosphere, the people, and he experience.

Each of the four speakers presented three top-notch lectures and we all learned at lot. In the evenings, lots of us gathered in the ship's library to chat about genealogy topics, brick walls, and other things. We became a closer group that way!

Lots of cruisers took advantage of the ports and the many shore excursions. 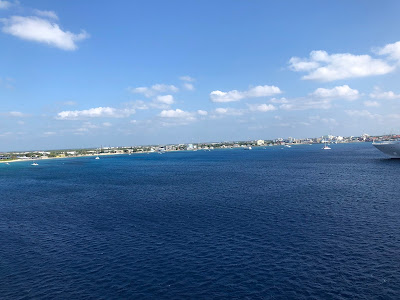 Above, we were approaching Grand Cayman. Unfortunately I do not have any off-shore funds to visit. BUT ... Blaine Bettinger and his sons have ancestors from the Caymans. They were met by a cousin and chauffeured around the island. The boys even got to swim with the big turtles.

People poured off the ship at Cozumel (below) for great shopping, food, some spirits, and more.

Highlights of my trip? I got stoned twice! No, not that way. I went to the on-ship spa for hot stone massages. They were heavenly!

Watch Facebook for pictures and videos from Ann, Blaine, Drew and me. We had a blast and made lots of friends. Gained a few pounds too but ....

Now we're all back home and ready for our next genealogy adventures!