The Genealogy Guys Podcast, co-hosted by George G. Morgan and Drew Smith, producers of the oldest continually produced genealogy podcast, and Rick Voight, CEO of Vivid-Pix, makers of RESTORE photo and document restoration software, are pleased to recognize the winner in the Unsung Heroes Grant at the Federation of Genealogical Societies Conference being held online. 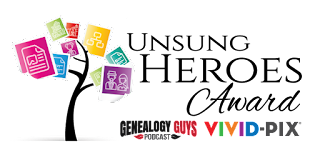 The winners selected for Unsung Heroes Awards for August 2020 are in the Individual and Genealogical Society categories:

Individual – Rosemary McFarland of Mount Eden, Kentucky. Rosemary created the Kentucky Genealogical Society's digitization project and has chaired the committee for the past three years. In this time, she has led an effort that first started by digitizing family bible records of members and anyone in the public. These digitized scans and indexes were then placed on the www.kygs.org website on the member portal where they are accessible for member researchers. This is an active project. Rosemary actively encourages members and the public to contribute family bible page scans to this ongoing effort. The current archive includes Bible records that date from the founding of the Commonwealth to today.

A second project that has been ongoing is the Kentucky Tax List project. This project is digitizing early tax lists from Kentucky counties that are not available anywhere else. Rosemary leads this effort and so far they have scanned and created indexes for the following Kentucky counties: Bourbon (1787-1788), Daviess (1873-1875), Fayette (1787-1789), Jefferson (1789), Lincoln (1787-1789), Madison (1787-1802) and Mercer (1789). These records would not otherwise be accessible unless a researcher were to physically go to the Kentucky Department for Library and Archives to view them.

Rosemary has also proactively identified rare and at-risk records and through her will and determination set out to get these records digitized and then made accessible to members of the Kentucky Genealogical Society through the member portal of the website.

She is also leading the volunteers who index these materials every single day. Just recently she led an effort to create an index for 46 years of the society's quarterly journal which had never been indexed.

The Eller Family Association in Midlothian, Virginia, is the society winner. The EFA was created in 1987 to help “promote a sense of kinship” and to “encourage and aid genealogical and historical research on Eller and allied families in the United States and Europe.”

In November 1987, the Association published the first of thirty years of quarterly newsletters that have included extensive genealogical information. From the start, The Eller Chronicles were made available by mail and, for those interested, on the Internet. By the mid 90’s, the publication was on the Association’s own website.

For the first several years, The Eller Chronicles were just photocopies but soon they were able to scan photos and documents into the publication. The first foray into an Eller Association website was pretty basic but it soon added documents, photos and back issues of The Chronicles.

Now they boast a website (www.ellerfamilyassociation.com) containing an online database of more than 60,000 names. Because there are multiple contributors, there are some duplications. Nevertheless, they believe there are 50,000 individuals there. In addition, there are more than 800 photos, 40 documents, 780 headstone-photos, 200 research articles along with maps, obituaries and web-links. Nearly all are linked to the names in the database. And it’s all searchable. They also include Association news and information about upcoming conferences.

There are numerous books about the Eller family, both in Germany and in the United States. Where they have permission, those books are online, or their website has a link to the book. In other cases, they provide information and a purchase-link.

The thirty years of their newsletter have been converted to a digital format and are also online and searchable. They reserve some parts of the website, like the most recent Chronicles, the membership list and information on living people, for members of the association. But the rest is open to all researchers and even those with just a passing interest. They know they are making an impact. In 2019 there were more than 49,000 visits and 5,677,000 page-views. Their website is usually among the top returns on Google when researchers are looking for information on the Eller ancestors.

The winners will receive a beautiful custom-made commemorative mug from Vivid-Pix with their choice of one of their own images, and an announcement on an episode of The Genealogy Guys Podcast. A profile of each winner has been published today on The Genealogy Guys Blog at http://blog.genealogyguys.com/ and recognition will be published at the Vivid-Pix Unsung Heroes Blog at https://vivid-pix.com/blog as well. They will also receive a copy of Vivid-Pix RESTORE software.

Many nominations in each category were received and these will be considered for future Unsung Heroes Awards. The nomination due date for the next set of awards is midnight EST on January 31, 2021. Full details and links to the nomination form can be found at

The Genealogy Guys Podcast and Vivid-Pix salute these selfless volunteers whose efforts make invaluable genealogical and historical information available to researchers around the globe. “We Sing Your Praises!”

About the Unsung Heroes Awards Partners 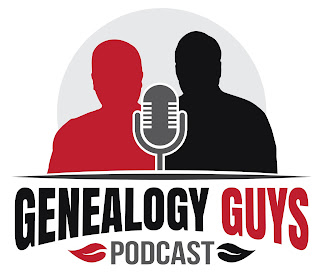 Vivid-Pix designs, creates and delivers Fast, Easy and Affordable Imaging Software. Since launching in 2012, Vivid-Pix has advanced its products to earn the support and respect of business leaders and photographers in over 100 countries. Co-Founder Randy Fredlund has more than 150 digital-imaging patents and has extensive experience in Research, Development and Commercialization, enabling him to translate theory into practice. Co-Founder Rick Voight has created billion-dollar businesses through Product Development, Sales and Marketing for Eastman Kodak and Hewlett-Packard. The Vivid-Pix Team is a far-flung group of excellent people who deliver software that “Give your pics (and documents) the Vivid-Pix Fix!”