USING CITY (AND OTHER HISTORICAL) DIRECTORIES IN YOUR RESEARCH

City directories were published in most cities annually or every other year in the 1800s and well into the twentieth century, long before telephone directories came into use. Some of the large east coast cities, such as Philadelphia, New York, and Boston, had directories in the late 1700s. The directories generally list the head of the household, his (or her) occupation, and their address. Sometimes they list all the individuals in the household who were employed and so you might find (young) adult children or other relatives listed. The information was usually gathered the previous year and then published for sale.  Many businesses took out advertisements in them, so there may be information about the place where your ancestor worked or the business he or she owned.
City directories generally had a history of the city at the beginning of the publication, along with lists of local government agencies and officials, churches, cemeteries, railroads, fraternal societies, and other interesting information about that location. Some directories include city maps.
HOW ARE THEY USED IN RESEARCH?
You can track a family year after year (or every other year) between censuses and, very importantly, during the gap caused by the loss of the 1890 US federal census. You can determine when they arrived or departed from an area, when the children became old enough to join the work force and when they left home to live on their own. Often, widows are listed as "Smith, Mary (wid John)" which can give you an idea of when a male ancestor passed away (some directories even list death dates!).
If you are researching the history of your house, city directories are a must! You can determine who lived in the home at specific times and when the house number came into existence or changed, or when the street name changed as well. Did you know that publishers of city directories were the impetus behind cities having numbered addresses for businesses and residences?
If your ancestors didn't live in a city, don't despair!  Many city directories had county or rural directories published in the back of each volume for area rural residents, which may include the rural route on which your farming and other country ancestors lived, and/or the acreage, section, township, and range of their property.  Some companies published farm directories separately, which also give the type of farming that was done, along with the number of cows, horses, sheep, etc. that each farmer owned.
There are also business directories listing all businesses and their owners; street directories with maps (think old-time Google Maps!); church directories; directories of physicians and dentists; fraternal society directories for groups such as a Masonic Lodge or the Order of Odd Fellows; social directories (also called Blue Books) for the upper classes; and yes, even historical telephone directories.
WHERE CAN YOU FIND HISTORICAL DIRECTORIES?
Most public libraries have city and other directories in their historical and genealogical collections. Many have been digitized and are online at subscription websites such as Ancestry, Fold3, MyHeritage, etc. but there are also many available online for free at websites for public libraries and local and state archives.  Many historical digitized book websites such as Google Books, Hathi Trust, FamilySearch Books, and the Internet Archive have free digitized directories available as well.
If you want to know more about historical directories and how to use them, check out the Historical City Directories group at https://www.facebook.com/groups/HistoricalCityDirectories.  To find an ever-growing list of online historical directories, visit https://sites.google.com/site/onlinedirectorysite. 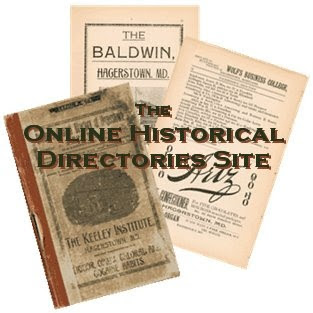