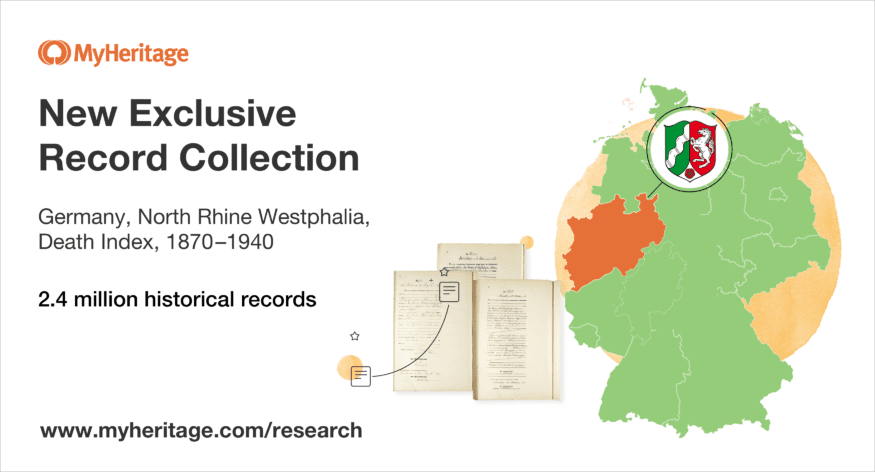 MyHeritage has just released an exclusive new record collection from Germany. The collection includes 2,450,551 records along with beautiful scanned images of the original documents. The images have been fully indexed by MyHeritage for the first time, making the information more accessible and readily searchable than ever before. These records are available only on MyHeritage, and are an invaluable resource for anyone researching their German roots.
Search Germany, North Rhine Westphalia, Death Index 1870–1940
Civil death registration records in Germany, called Personenstandsregister, were kept by the German Civil Registrar. They cover 98% of the population and have been mandatory in all German states since 1876. They may include the first and last names of the individual, the date and place of birth and death, age at death, residence, name of spouse, and even the names of the individual’s parents.
The state of North Rhine-Westphalia is the most populous state of Germany with over 17.5 million inhabitants. During the period covered by the records in the collection, the region comprised 3 provinces: Westphalia, North Rhine, and the German Free State of Lippe. They were unified by the British after World War II.
Millions more records will be indexed and added to this collection in the future, in a series of planned updates.
This collection is a true treasure trove for those with German heritage. I hope you and your readers find it valuable.
You can search the collection now and read more about the North Rhine-Westphalia Death Index 1870–1940 on our blog.
Wishing you good health and sending warm regards,
Daniel Horowitz
Genealogy Expert