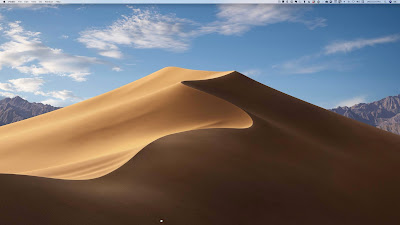 Like your physical desktop, your computer desktop can quickly become cluttered with files from past projects. Regardless of which operating system your computer uses, you may find that you're saving items to the desktop without putting them away when you're done with them. So let's use this day to see what is on our computer's desktop, and start the process of moving those files elsewhere.

Let's start by identifying what should be on your desktop. It's fine to put transient files there, ones that you may have recently downloaded from online and which you are already able to delete because you've dealt with the file in some other way (perhaps sending it as an attachment to a friend). Once you have successfully worked with these files, and the downloaded file is no longer needed, go ahead and move it to the trash.

If you are starting with a fair number of files to deal with, go ahead and review them (hopefully the names alone will tell you what they are), moving the no longer needed ones to the trash. What do you do with the remainders?  They will fall into two categories: ones that you are currently working with, and ones that are part of some past project that you want to archive.

For the files that need to be archived, you could rename each one of them and then move each of them to the right folders, but this might take some time today if you have a lot of them. And we'll get to organizing your non-desktop files in a few days. So I would suggest, for now, moving all of them to a folder called "!Inbox".

At this point, you should have very few files remaining on your desktop. To reduce clutter, you may even want to create a desktop folder with the name of the current project, and move all of those files into it. That will leave you with a single folder icon on your computer's desktop.

The toughest part of this process is to create the habit of dealing with new files as soon as you put them on the desktop (either by deleting them after they are used, moving them to the !Inbox for later filing, or moving them into a current project folder).
Posted by Drew Smith at 12:30 AM