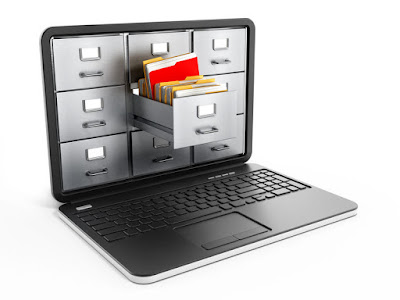 By now, you've probably noticed that each day we're alternating between organizing physical items and organizing digital items. We'll do this for a few more days, although eventually, we'll be focusing exclusively on the digital side of things.

In the physical world, you'd probably have more than one file cabinet (perhaps even in different rooms), where everything in a given cabinet would probably be of the same type or topic. Then you'd have specific file drawers whose contents would be even more closely related, and then you'd have the usual set of folders and files inside in each of those. This has been how physical material has been organized since the invention of file cabinets in the late 1800s.

When computers were invented, and digital files needed to be organized, the metaphor of "folders" was taken from the real world. However, rather than dealing with file cabinets and file drawers of fixed size, we could have folders of any size (at least up to the size of the entire hard drive), and we could put folders inside of folders (inside of folders, etc.), so we didn't really need the separate idea of a file drawer or file cabinet. We just had folders (and the folders and individual files that lived inside of them).

How does your knowing this help you organize the files on your computers? Let's consider these issues:


So what else do you need at the top level (and how do you keep them listed first)? You start their names with an exclamation point (!), so that they will sort first above any folders created by your applications. You'll have one for genealogy (!Genealogy), or possibly two if you genealogy both as a business and for your personal research (!Genealogy - Business and !Genealogy - Personal Research). If you have a non-genealogy business that you use your computer for, you may have a !Work folder (or named after your company). And you're likely going to want one for home-related or personal things (!Home).

You may need an !Other folder to file those things that are not fitting neatly into any other category, or to move everything into until you have relocated the files to their proper top-level folder.

And you'll want an !!Inbox folder (note the two exclamation points) that will be the first folder, and you'll use this to put any new files that you haven't had a chance to file away elsewhere. Make a plan to visit this folder at least once a week so that files can be moved out of it and categorized properly.
Posted by Drew Smith at 3:00 AM