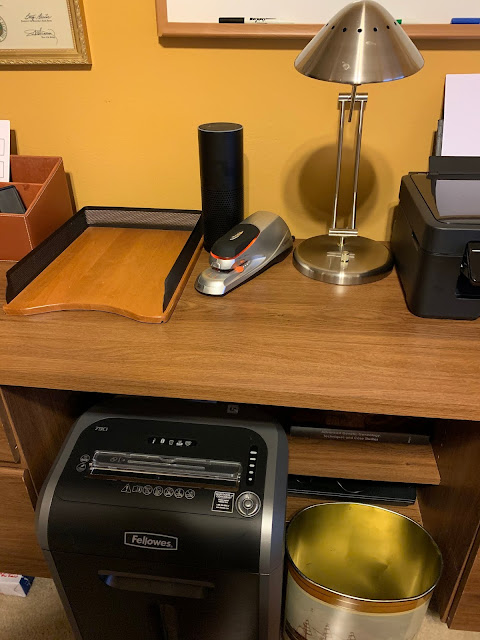 Now that you have prepared your physical desktop and computer desktop for future work, let's address some of the clutter found elsewhere. Today, we'll look at your physical inbox.

If you don't already have one, you need some sort of tray or shelf on which to put all incoming paper. This includes not only the things that arrive by mail, but also things that you have printed out from your printer, as well as material that has been given to you by other people you share a home with (if you don't live alone) or that you have brought home from a research trip. If you are sharing a home, you want to get your housemates into the habit of putting things into your inbox, and not in your chair nor on your desk nor on any other flat surface.  But even if you live alone, you have to train yourself to do this, too. To save some time later, it's fine for some things to skip the physical inbox and go directly into the trash, such as nearly all of the advertising circulars you receive in the mail.

Once you have a physical inbox, you'll want to make clearing it out a regular routine, either daily or every few days (if you're not receiving anything time-sensitive by mail, you can probably do this clearing once a week).  If you already have an inbox, and it is already overflowing with things to deal with, then find a folder or some other place to put the current stack (yes, you're still going to address what is in it, at least eventually), and then start from scratch with an empty inbox so that you won't feel overwhelmed with dealing with it.

Once things are in your physical inbox, and you have reached the regular time you've set aside to deal with it, then that is when you can throw some things away (so you probably want the trashcan near the inbox), scan some items so that you can then deal with only the digital files and throw away the paper versions (unless they are worth preserving), put other papers into file folders (which we'll address in a few days), and finally put the remainder into project folders for active use.  If the items you're going to throw away have any personal information on them (such as financial account numbers), make sure to have a nearby shredder so that you can feel safer about discarding these documents.

If you don't already own a physical inbox and a shredder, this is a good time to invest in them!  Nearby can be your office trashcan and a stapler. Put the inbox somewhere (such as on a side table) where it is not in your direct line of sight when you are using your physical desktop and computer. You don't want to be distracted by it.
Posted by Drew Smith at 3:00 AM